I AM BAPTIZED INTO CHRIST 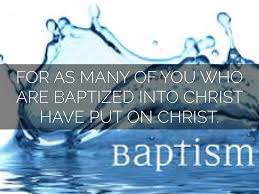 In my small town adolescence, there were athletes and musicians, country club kids and those from across the tracks, future farmers and future homemakers, brains and thugs, kickers and wannabe hippies, hot rod guys and the girls who liked them, kids with jobs and those who would spend the rest of their lives running for cheerleader as if life itself depended on being popular. And there were those whose whole lives would be a quest to prove they were somebody because high school was so painful.

I spent the first forty years of my life trying to figure out who I was going to be when I grew up. Musician? No. Lawyer? No. Politician? No. Professor? No. Great American novelist? No. Pastor? Yes.  The calling that encompassed all the nascent gifts that had been given. Bishop? Maybe? Perhaps? No!!!

The web of relationships into which I was born and those I chose included son, brother, grandson, cousin, uncle, friend, neighbor, citizen, student, scout, boyfriend, fiance, husband, father, colleague, supervisor, etc.  All of these made certain demands and gave shape to my days and years. All of these were places where God called me to serve my neighbors. But as deaths came and addresses changed and responsibilities grew, I began to understand all these roles and relationships were and would be penultimate. The grass withers. The flower fades. The Word of the Lord endures forever.

There is only one identity which endures, the one identity graciously given by the enduring Word of God…child of God, baptized into the death and resurrection of God’s beloved Son Jesus!   All other identities will pass away. All!

When the nonsensical claims of the surrounding culture suggest there is no such thing as maleness or femaleness but rather a plethora of “genders” arrived at by definition of the autonomous self, we Christians shake our heads sadly at the confusion promoted by pseudo-science and a world spiraling downwards into the dustbin of eternity. Politicians, academicians, and entertainers  promote a sterile, nihilistic, ugly, utilitarian vision… a breathing, moving, urinating, defecating, copulating, aborting imitation of stalinist architecture. They are doomed by the very trajectory of their tired cacaphonous existence. The grass withers. The flower fades. The Word of the Lord endures forever.

There is a still more perfect way. The daily loss of the rebellious autonomous self, the drowning of the old Adam or Eve in baptismal waters. The daily renunciation of the devil, his works, all his ways.

The Rev. Dr. Samuel Zumwalt has worked in churches for 46 years and in May 2022 celebrated the 41st anniversary of his ordination to the holy ministry. He is a member of the Society of the Holy Trinity (www.societyholytrinity.org). In 2004, Pr. Zumwalt moved with his family to Wilmington from Texas, where he served for 23 years as pastor of small, midsize, and large congregations.
Scroll To Top