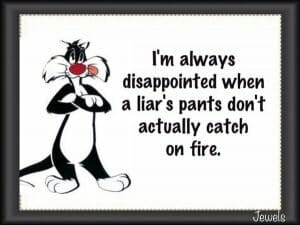 “Liar, liar, pants on fire.” If you have never said those words, you heard them already as a child. “Honestly… I swear to God… I’m not lying.” You hear those words sprinkled into conversations all the time. And, depending on the relationship you have with a person and depending on how well a person can tell a story, there’s a good chance you will say, “I believe him” or “I have no reason to doubt her.”

If you have ever been through a bad break up, you know that the folks who have known the couple for a long time tend to take sides. Soon, there’s gossip involved. “Did you know?” or “I heard” or “I can’t believe how terrible he was to her…or how awful she was to him.” When there is a child or children involved, it starts to get really, really ugly. There was a time when the courts assumed the mother would always be a better custodial parent, or, if one of the parents had someone on the side, that automatically worked against that person’s custodial rights and the division of property. Not so much anymore. Barring very real danger, the courts tend to believe that the child or children benefit from having two parents in their lives…even when the parents have come to loathe and despise each other.

How often do you ask the question: “Who benefits?” By that I mean, “If I trust this person’s story over that person’s, who will benefit most from my having given my trust?” The follow up question may well be, “What’s at stake in all of this?” Unless you can see almost pure altruism at work, the “who benefits” and “what’s at stake” questions cut through a lot of the metaphorical greasepaint. In other words, pull back the curtains, strip away the theatrical makeup, and look at what’s going on.

George Soros doesn’t invest billions in political candidates because he likes them. They are useful idiots to his own political agenda. Neither Adam Schiff nor Devin Nunes are disinterested parties in the latest media circus. They are partisans from two very different parts of California. Both want to win.

When a congregation is going through conflict, as every congregation does, “who benefits” or “what’s at stake” or “what do you value most” are very important questions to ponder prayerfully. The more that you have been trained to think biblically and theologically, the more you have the right framework within which to ponder prayerfully. Christ’s Church is larger than any congregation, any regional judicatory, or any denomination. Christ’s Church is wider than the decades of most recent memory. There is one biblical story in which, as any Lutheran Christian ought to know, the clearest passages shed light on the murky. All of Scripture, wrote Luther’s associate Melanchthon, can be divided into law and promises. At the end of the biblical narrative is the destruction of the old creation and Christ making all things new.

Some folks spend an awful lot of time choosing to be fearful over “what if” or “oh-my-God-not-that!” In every instance, somebody is pushing fear buttons with dire warnings and implied threats. If it’s a human being pushing those buttons, ask the prayerful questions (“who benefits”; “what’s at stake”; what do you value most”). If it’s an inner voice pushing buttons, it’s not God! The fear of the Lord is the beginning of wisdom – not the fear of a future that may never happen. God alone is trustworthy!

The Rev. Dr. Samuel Zumwalt has worked in churches for 44 years and in May 2020 celebrated the 39th anniversary of his ordination to the holy ministry. He is a member of the Society of the Holy Trinity (www.societyholytrinity.org). In 2004, Pr. Zumwalt moved with his family to Wilmington from Texas, where he served for 23 years as pastor of small, midsize, and large congregations.
Scroll To Top