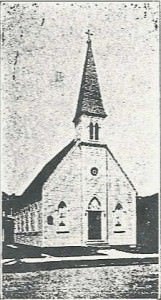 St. Paul's Lutheran Church was the first Lutheran congregation in Wilmington, NC. St. Paul's was founded in the mid 1800s by German immigrants who had settled in Wilmington. Since English was the second language of most members, services were held in German.

In the latter part of the 19th century there was a desire by some members of St. Paul's to provide Christian Education in English to children of the congregation. On April 13, 1890, the Pastor of St. Paul's Lutheran Church, Reverend F.W.E. Peschau, D.D., began St. Matthew's Lutheran Sunday School in the northern section of Wilmington in the H.L. Fentriss Hall.

On March 21, 1892, St. Matthew's was organized under the name "St. Matthew's English Evangelical Lutheran Church". Dr. G.D. Bernheim was called to be the first pastor of the new English-speaking congregation on April 27, 1892. Dr. Bernheim was born in Prussia and apparently had some difficulties with English himself. The church was a young and struggling congregation, and dealing with a large debt and annual expenditures. However, Dr. Bernheim is credited as having untiring zeal and large-hearted leadership that sustained and developed the church in its early years. Dr. Bernheim served the congregation until his retirement in 1899 at the age of 72.

The first church building was a modest wooden structure located at 919 North Fourth Street. This thriving section of town included all of Wilmington's commercial, retail, government, civic, social, cultural and religious life. Streetcars ran on a line that circled the city, and made it possible to ride around town and get off within walking distance of anything. These were also "horse and buggy" days, when there were horses on every block and each neighborhood had its own grocery store. North Fourth Street was also the gateway to the Wrightsboro and Castle Hayne areas where rich farmland abounded, and farmers grew vegetables and flowers that were shipped to the northern markets. Many of St. Matthew's faithful members came from this area. In the early 1900's the congregation reached its highest point of opportunity, with Sunday School increasing by 90% and church membership growing greatly as well.

During World War I, April 1917 to November 1918, members of the congregation assisted in gathering and making supplies for the Red Cross and caring for the social and spiritual needs of those in service that were stationed in Wilmington.

As the congregation grew through the early decades of the twentieth century, church leaders realized a new building would be needed. During the 1920s land at 17th and Dock Streets was acquired for the proposed sanctuary. However, when the Great Depression came, the church could not see its way to begin a new building program. St. Matthew's, along with the rest of the country was living from day to day waiting, hoping, and praying for the dawning of a new day. The church was fortunate in having a number of farmers in the Wrightsboro area as members, who furnished the pastors with produce, meat and milk products. 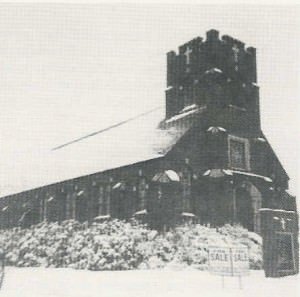 With the 17th Street church quickly becoming too small, church leaders realized the need to look for another location where St. Matthew's could grow. During 1960, due to limited space, it was decided to re-locate once again. Property was purchased on Highway 132 (later renamed South College Road) across the street from three buildings housing Wilmington College (i.e., today's UNCW). The church at 17th and Ann Streets was sold to the Christian Missionary and Alliance Church.

The first building on the College Road site was the Educational Building, which included a fellowship hall, church office and classrooms. Groundbreaking ceremonies were held on February 24, 1963. During construction St. Matthew's congregation worshipped at the 7th Day Adventist Church at 29th and Market Streets. On October 20, 1963, the congregation worshipped in their new Educational Building which was later named the McCombs Fellowship Hall after the death of Rev. Charles McCombs in 1973. Pastor McCombs was the first pastor to serve at the College Road church and the last to serve at the church at 17th and Ann Streets. The congregation worshipped in McCombs Fellowship Hall until the sanctuary was completed in 1972.

The expansion of our facilities has enabled St. Matthew's to reach out to the community. Numerous community groups meet at St. Matthew's. Something is always going on. In the early 1990s, St. Matthew's joined other churches in the Interfaith Hospitality Network, providing services to the homeless. The Stephen Ministry program was begun to help people both in the congregation and in the community. The church helped to organize a new chapter of the Lutheran Campus Ministry for students at UNCW. As new members join the St. Matthew's family, many new opportunities for service will follow.

In the first decade of the 21st century, St. Matthew's leaders began to describe this congregation as a Discipleship Center. After a study of Michael Foss' book "Power Surge," the Church Council began to emphasize six marks of discipleship:

1) Pray Daily;
2) Worship Weekly;
3)Read and study the Bible;
4) Serve at and beyond St. Matthew's;
5) Encourage each other to develop spiritual friendships; and,
6) Give generously of time, talent, and treasure. 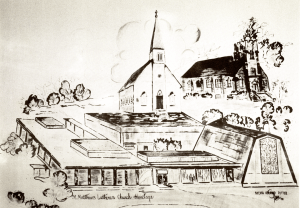 As this parish begins another year of God's grace, St. Matthew's leadersare committed to welcoming and embracing those who want to follow the Lord Jesus in lives of humble service. At the same time, St. Matthew's leaders understand that whoever wants to lead will authentically embrace the six marks of discipleship as evidence that she or he is following the Lord Jesus -- a kind of lifestyle evangelism that will attract others to Him!